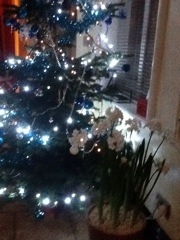 This is the first year I can remember that no children have been involved in decorating the house for Christmas. And guess what? It’s tasteful! I got to do it with my husband. So it’s a real tree (how expensive are they this year!) and no tat on it. Personally I’d had enough with school and home-made tree decorations that would never have won a Blue Peter badge. And the ones that came from my in-laws trip to the US … well they have outlived their former beauty. Had enough of singing birds with tatty feathers and faded gold baubles. Time for a trip to Wilkos, the home of cheap taste, for a tree makeover in blue and green. And it looks lovely. Colour-coordinated in blues and greens. Then our neighbour came round this morning with a cloth heart decoration she’d made for us. In red! What should I do? Yes I added it to the tree. Was she watching Kirstie last night? She made a whole load of hearts. And candy lollipops inspired by a trip to New York. Who else would do something as daft as that? She could have gone to Blackpool.

Next to the tree are the white paper narcissi, grown from bulbs. They fill the kitchen with their fragrance. A ideal Christmas gift but too late to do now for anyone this year. 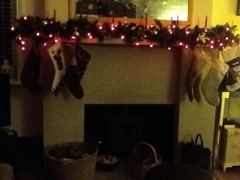 The fireplace is bedecked with stockings for the boys and girls. It’s expected every year but one of the hardest tasks, I find. How do you fill stockings for 4 to 34 year olds? And when do they stop being children and wanting them? I don’t remember having one after the age of about 10. My Mum used to tell stories about how they opened their stockings and found a pencil, a rubber, an apple and an orange. Then they had to return the fruit to the bowl. Sounds like Dickens and reminds you how poor people were in the 30s. Everyone has their own stocking here and inevitably I forget whose is which and they have to do a made swap as they empty them. No one is allowed to keep their stocking; it gets put away for the following year. A stray boyfriend one kept his and I wanted to write and request it but it seemed a bit churlish after the break-up.

Then there’s the kitchen clock which plays a Carol on every hour and the toilet door knocker that sounds ‘Alleluia’ when anyone goes in.

The only thing missing here is the dog in the hearth. Still not used to her not being around.